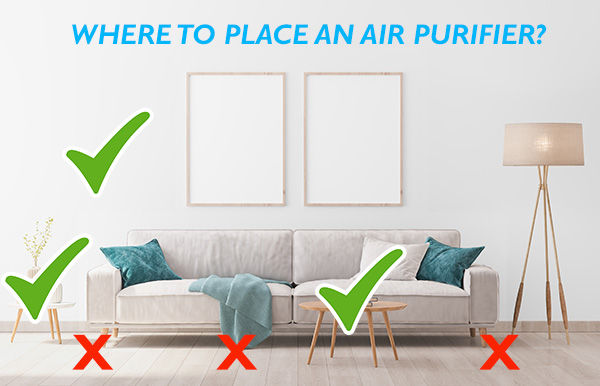 Two identical air purifiers can have a completely different impact on the indoor air quality.

And it all comes down to where you place the air purifier.

Generally, you can increase the efficiency of the air purifier by up to 20% if you correctly place it. What is even more important, if you put it in a corner or behind a television, you can lose more than 50% of the overall air purifier capacity.

Some companies try to help you out with air purifier placement. For example, Dyson air purifiers come with a ‘format’ in specifications; they are either ‘floor’, ‘desk’, or ‘tower’ units.

For all other air purifiers, we need to clarify this one thing:

Where is the room is the best place to place an air purifier?

To answer that, we need to concentrate on where in the room is the biggest:

Based on this and many other factors, you should be considering 7 golden rules when figuring out where to place an air purifier.

If we consider all 7 rules, we can help an air purifier do its job better simply by choosing the right location for it.

Be mindful of the bonus tip (you’ll find it below the 7 basic rules) connected with the air purifier being portable (you can and should move it around to achieve the maximum air cleaning effect).

Where should I place my air purifier?

The 7 rules below are a mixture of recommendations of:

Be mindful that you can gain 20% efficiency by placing an air purifier correctly. What is even more important is to know where not to place it; you can lose up to 50% of its air cleaning effect.

However, we don’t need special help here. We can all use our senses to determine where the concentration of air pollutants is the highest. You can use:

When placed close to the most problematic areas (with lower indoor air quality), the air purifier can improve air quality rapidly.

You already know that hotter air will move toward the ceiling.

Should the air purifier be on the floor?

Not really. Placing an air purifier off the ground (3 to 5 feet is perfect), you not only capture the horizontal indoor air movement but also expose an air purifier to the vertical air movement. Smaller Medify Air air purifiers, Levoit and Coway units, for example, can easily be placed on the desk.

In such a way, an air purifier has plenty of air at its disposal. It can suck it in the device readily and clean the air quickly.

In the office, you can put it on the office desk. Smaller units (under 10 lbs) are most appropriate for that. In the bedroom, you can put an air purifier on a windowsill or even on the nightstand.

The best air purifier placement would be on the wall. Of course, to suspend it on the wall, you have to elevate and secure it in much the same manner you would hang a painting.

In short, keep an air purifier off the floor.

3. Put It In Places With Highest Airflow (Doorways, Walls, Near Window)

Placing an air purifier near a window, close to a doorway, and especially on the walls where the air moves make a lot of sense.

Moving air also has more large-sized pollutants. This is because moving air has enough energy to lift dust, mold spores, and other pollutants. It can carry it across our whole house; this is exactly what we want to prevent by using let’s say Winix or Honeywell air purifiers.

Capturing pollutants near entry points – like front doors or open windows – also presents the first line of defense again outdoor air pollutants that might otherwise be dispersed throughout our home.

Obviously, the air quality in that corner might be splendid. Still, air quality in other rooms would not be affected as significantly as it could have been with proper air purifier placement.

Here are 3 reasons that evidently make a corner the worst choice to place an air purifier at:

By placing a purifier in the corner, you can seriously reduce its ability to function properly. For example, you would never put a Dyson HP01 air purifier in a corner.

Avaya from obstacles. You want airflow through the air purifier to be unimpeded.

Places behind the TV represent a tempting free space where you could put an air purifier. Do try to resist that urge; an air purifier should have at least 3 feet of space in all directions to function at its maximum capacity.

Another problem is usually with books. Air purifier increases indoor air quality. It’s only reasonable that people like to read books in a fresh air environment. However, we may place a bunch of books near an air purifier and thereby impede its ability to create maximum airflow.

As a general rule, try to give air purifier space. The more space you give it, the easier and quicker it will do its job properly.

There are two places in our house that we think would be a good placement for an air purifier:

Obviously, the places with high humidity are also known as a brilliant breeding ground for mold. Mold infestation will usually develop in the bathroom.

In such a case, a dehumidifier might be a better idea. You can also combine it with using an air purifier when you’re not actively using the bathroom (during the night, for example). Just remember that relative humidity should be below 50%.

Note: If you need to increase humidity (usually during the winter), you can look into the best air humidifiers for large spaces here.

When asking, ‘Where should I place my air purifier?’ we’re usually thinking about optimizing the airflow through the air purifier.

One thing to be careful about – and that doesn’t impede airflow – is the presence of electronic devices.

Things like TV, stereo, or microwave might be harmful to the function of the air purifier. It’s best to avoid placing a purifier near electronic devices. Sophisticated new tech air purifiers like Molekule Air might be especially vulnerable as far as electronic interference is concerned.

A minimum of 5 feet should be respected.

If you take into account these 7 rules, you’re good to go. You have an idea of where to put your air purifier in your bedroom, living room, or office.

Now here is a bonus tip: Air purifiers are portable for a reason.

“Can you move my air purifier from room to room?”

Of course you can. They usually weigh less than 20 pounds and can be easily moved around. When looking at a perfect spot to place our air purifier, we want to maximize the indoor air that is available to them. As we have written in the article about how many air purifiers you need here, you don’t necessarily need one for each room.

By moving an air purifier from the bedroom to the living room and baby room, for example, we are effectively increasing access to polluted indoor air. This can have a significant impact on how well the air purifier is utilized.

Just by moving it around, you can make a bigger difference in the effectiveness of an air purifier than placing it perfectly in a single room.

If you find this article useful, you can read a similar one about where to place a humidifier here. The same basic positioning principles apply to humidifiers as well.