Do you know why HEPA filters are called ‘HEPA’?

It’s actually based on the MERV rating. MERV stands for Minimum Efficiency Reporting Value. The rating was devised by the American Society of Heating, Refrigerating and Air-Conditioning Engineers (ASHRAE) to answer one question:

Which air purifier is the most effective?

In the most basic sense, the MERV rating gives us an idea of how well filters (air purifiers, furnaces) can filter out 0.3 to 10 micron (10-6m) particles. That’s the size interval that includes most air pollutants smoke, dust, cooking oil smell, mold spores, and bacteria, to name just a few.

Simple use of MERV rating chart for air purifier filters: The higher the MERV rating, the better the filter.

Here is Ron Wilkinson’s (P.E.) commentary on the MERV scale when it first came to light in 1987:

(MERV rating) represents a quantum leap in the precision and accuracy of air purifiers.

We’ll look at MERV 1-20 ratings in the MERV rating chart (you’ll find the chart further on). We’ll also look into how high a MERV rating an air purifier should have to best filter out different air contaminants (pollen, mold spored, smoke, dust, etc.).

In the end, we’ll finally see why HEPA filters are called HEPA (and reveal which filter is even better than the HEPA filter). But let’s start with what kind of particles are between 0.3 and 10 microns:

Air Contaminants Between 0.3 And 10 Microns

Let’s look at examples of two filters with 10 MERV and 14 MERV ratings.

When you’re buying an air purifier for a specific purpose, you need to know how big the air contaminants you’re looking to remove are. These are the 4 average contaminant size intervals MERV rating applies to:

These are just a few contaminants that we want to get rid of with a good MERV air purifier. You can check the whole EPA’s list of air pollutants here. 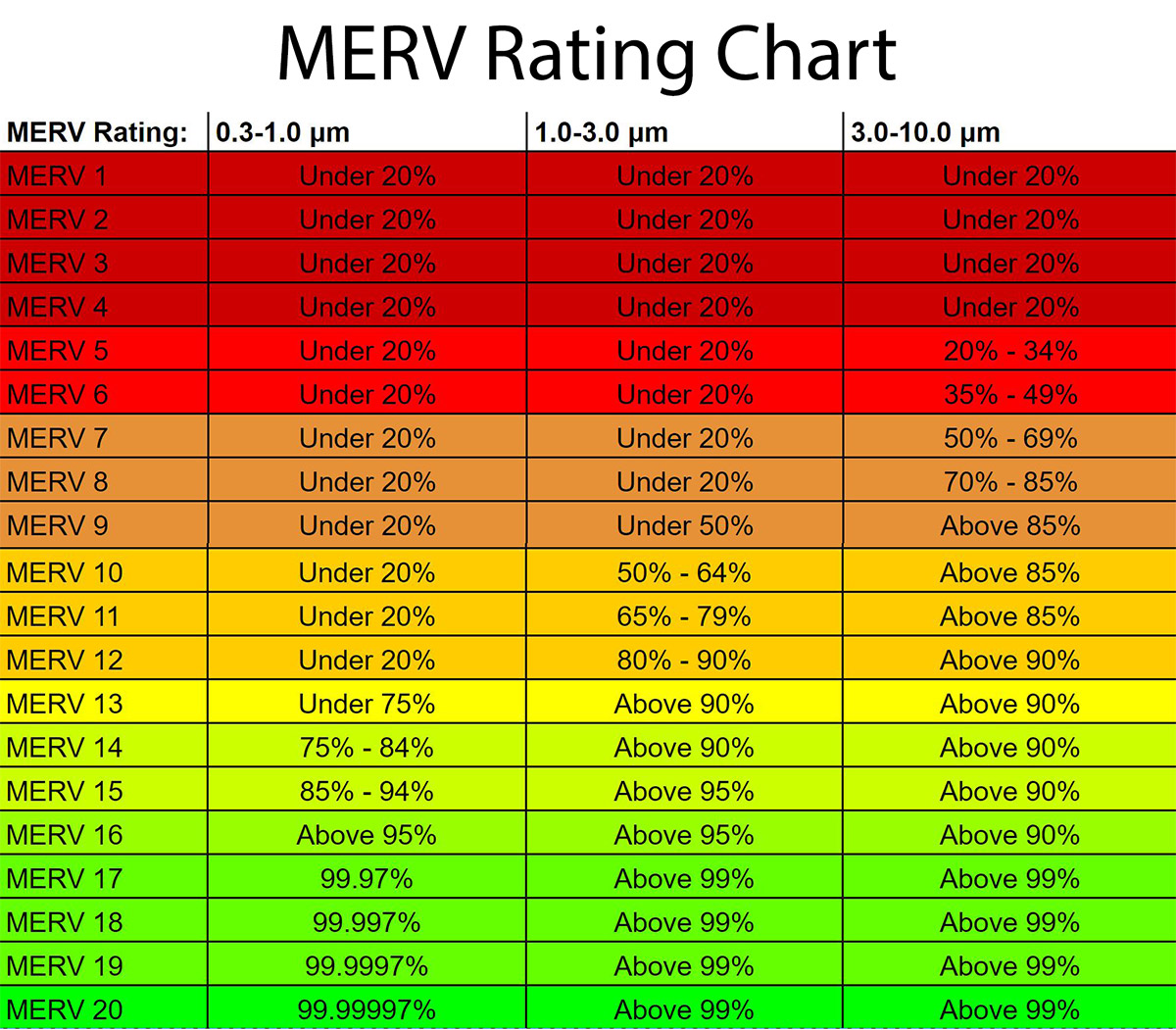 MERV Rating In Air Purifier Specification Sheets (Or Lack There Of)

Here is a list of the best air purifiers; the best ones have to have filters with as high MERV rating as possible.

What is interesting is that you’ll rarely see MERV rating in an air purifier specification sheet. It is quite an important filter-specific factor.

Here’s the reason why:

It isn’t easy to navigate through 20 classes of MERV ratings. That’s why air filter producers don’t usually specify the MERV rating. Rather, they use simplified words that everybody knows.

Why Is HEPA Filter Called HEPA?

HEPA stands for High-Efficiency Particular Air. Here’s the definition of what that actually means:

Definition: HEPA filter is a mechanical filter that must remove 99.97% (according to U.S. DOE) of particles whose average size is equal to 0.3 microns.

The ‘M’ in MERV rating stands for ‘Minimum.’ As you can see, the HEPA filters surpass the most restrictive 0.3-1.0 micron particle size interval MERV rating is based upon.

In other words: HEPA filters are better than anything MERV rating can measure. They are not ‘Minimum’ efficient.

In fact, they are high-efficiency filters. Their rating is based upon filtering out a particular size of air particles, 0.3-micron ones. You can check the best medical-grade air purifiers here; these use H13 HEPA filters.

Because they go ‘off the MERV chart’, they are referred to as HEPA filters or high-efficiency filters.