When it comes to heating devices, there is no single specification more important than the HSPF rating.

HSPF rating is the key metric for all heating devices; be it heat pumps, furnaces, or water heaters.

Understanding it gives you the fundamental insight into all heating devices.

In fact, it’s so important that every larger heating device – below is an example of a mini-split heat pump – is required by law to include the HSPF rating: 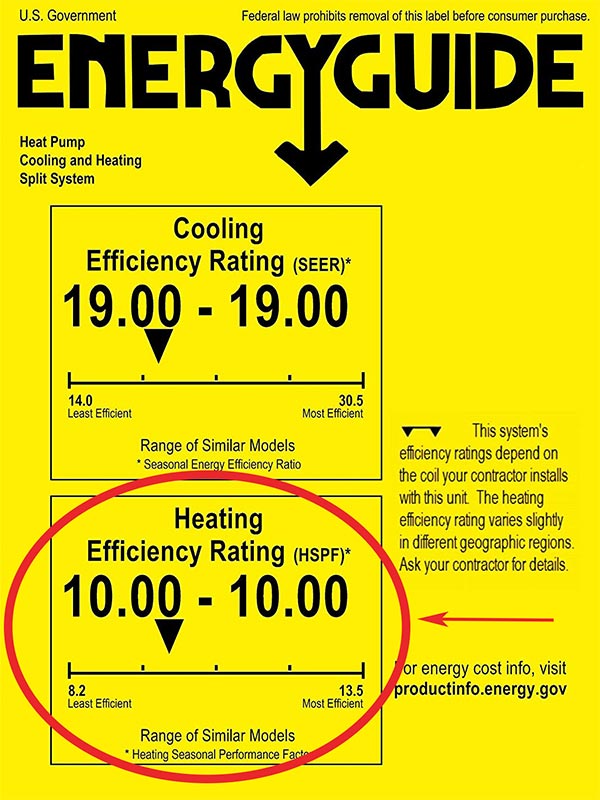 HSPF stands for ‘Heating Seasonal Performance Factor’. It is a metric that determines the overall energy-efficiency of heating devices in much the same way as the SEER rating for cooling devices.

It gives you an idea of how significantly will running such a heat pump impact your electricity bill. You can be looking at several $100 savings every heating season with a high HSPF rating heat pump.

Basically, the HSPF rating tells us how much heating effect (in BTUs) we will get per kilowatt-hour (kWh). Here are two practical examples:

Obviously, it’s much better to have a heat pump with a higher HSPF rating (in this case 10). Such a heating device will draw less energy for the same heating effect, and you will pay less in heating expenses. You can check out a list of the best mini-split heat pumps with the highest HSPF rating here.

In the following article, we will answer:

How Is HSPF Rating Calculated?

To understand it fully, we need to know how the HSPF rating is calculated. HSPF is a metric of energy-efficiency measured throughout the winter heating season. Every winter, we can measure:

Based on this, we can calculate the HSPF rating like this:

Be aware that we have to use watt-hours, not kilowatt-hours. The conversion is simple enough; 1 kWh = 1,000 Wh. If you use the numbers in our example, we get:

Here is a quick summary of heating costs:

You can see that (in our example) higher HSPF 10 device produced $500 fewer electricity costs than lower HSPF 8 device. That’s the true power of energy-efficient heating, and it leads us to this point:

What Is A Good HSPF Rating For Heat Pumps?

In the US, the minimum federal HSPF rating for all units is 7.7. To earn an ENERGY STAR label, a heat pump achieves at least 8.5 HSPF (for mini-split heat pump systems) and 8.2 HSPF (single-phase heat pumps).

To give you an idea of the difference in these HSPF ratings in the electricity dollars, we made some calculations. Let’s say that a 7.7 HSPF heat pump would need $1,000 for heating. How much would the 8.5 and 10 HSPF heat pumps need? Here is the cost calculation:

Bigger units can have higher HSPF ratings; multi-zone mini-split units are especially energy-efficiency in the winter. For example, in the list of the best 4 zone mini-split systems, you will find a heat pump with a 12+ HSPF rating.

How Much Can You Save By Buying Heat Pump With Higher HSPF Rating?

Obviously, saving $1,000 seems like a good idea. But we need to be aware that the cost of any heat pump is comprised of:

The real question is, does the lower running electricity costs justify the higher initial cost of a high HSPF heat pump. Some of you have requested an HSPF calculation that could explain that (and we’ve prepared it).

But let’s first look at one common example of two similar devices:

In 10 years, which one will be more financially viable?

Let’s first presume that the heating season lasts for 3 months, and you run the heat pump for 8 h per day, yielding 1000 working hours per season. Let’s also use the US national average kWh price of $0.1319.

Both devices generate 36,000,000 BTU of heating power. Knowing the HSPF rating, we can calculate how many kWh of electricity they burn using the following equation:

Here is how many kWh each device spends with the electricity dollar amount:

HSPF rating is used to evaluate many types of mini splits. Here are some examples of spec-by-spec analysis in which HSPF rating was used as a contributing factor:

If you have any questions about the HSPF rating, you can use the comment section below and we will try to help you out.