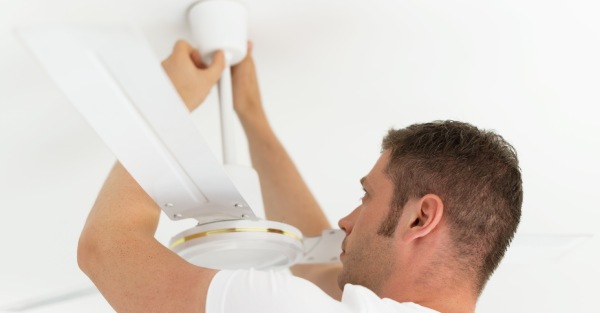 Now, every ceiling fan is powered by a split-phase single-phase AC motor that has two coils:

The job that the capacitor has to perform is a phase switch between these two coils. Example: When you start the ceiling fan, the start winding coil is turned on. In order for the run winding coil to come online, you need a working capacitor to make the switch.

The same goes for switching between fan speeds. If you want to switch fan from Speed 1 to Speed 2, you need a working ceiling fan capacitor.

That means that if you have a bad capacitor, it won’t be able to:

Based on this understanding, we can now better understand what the symptoms of bad ceiling fan capacitors are:

If there is something wrong with the capacitor, we will see telltale symptoms just by trying to operate our ceiling fan normally. Here is how to tell if the ceiling fan capacitor is bad:

In short, if the ceiling fan doesn’t start, spins slowly, or some fan speed settings are rotating the fan slowly or not at all, you have a case of a bad ceiling fan capacitor.

Hopefully, this gives you enough insight to diagnose and detect if you have a bad ceiling fan capacitor.