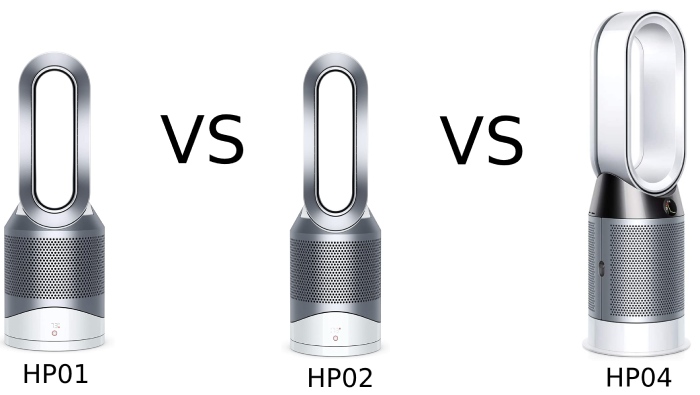 Dyson’s Pure Hot+Cool series is fantastic. If you check the chatter about HP01 vs. HP02 vs. HP04, these 2 preconceptions here are just the start.

One thing is clear:

It gets even better:

All these Dyson Pure Hot+Cool models are very similar. Same features. Same design. If you compare HP01 versus HP02, they even have exactly the same specification.

Most important of all, this is the most advanced Dyson series. All the 3 models are – via the Triple Function – capable of operating as:

Here is another one:

That’s exactly what we did. We look at everything – all the specs, the filters, airflow, coverage area, noise rates, special features, prices, and existing reviews – to answer just one thing:

Which is the best Dyson Pure Hot+Cool air purifier?

We’ll start by putting all the Dyson HP01 vs. HP02 vs. HP04 specifications in one big comparison table. Further on, we’ll go specs-by-specs and explain exactly where the HP01, HP02, and HP04 differ.

In the end, LR gives the recommendation for which Dyson Pure Hot+Cool model is the best for a specific situation. Close to the end, you will also find the available deals for all the 3 models, if applicable.

We’ll start with the comparison table. If you’re in a hurry, you can jump to the verdict. LM, however, finds it fair to be equally thorough with every air purifier assessment:

Filters are the most important parts of any air purifiers. They are the very thing that captures large and small particles, as well as adsorb undesired odors.

Comparing Dyson HP01 vs HP02, we find no difference. Both units use the same 360-degree Glass HEPA filters. HEPA filters are necessary; they are independently tested to remove more than 99.97% of small 0.3 micron airborne particles.

Compared to HP02, the HP04 is different. The filtration system is upgraded to 360-degree Glass HEPA Media filters. That ‘Media’ in there that separates the HP04 filters from HP01 and HP02 filters is important.

HP04 has the same HEPA filter + activated carbon filter. That activated carbon is a major difference when it comes to adsorbing smells. Example: If you want to use an air purifier to remove cigarette smoke, the HP04 would be the best option.

Here’s the depiction of the HP01, HP02 vs. HP04 filters we have already seen:

In all models – HP01, HP02, HP04 – it’s recommended to replace filters every 12 months. No difference there; only a $10 difference for better Dyson HP04 filters.

Airflow Of Dyson HP01 VS HP02 VS HP04 And Room Coverage

As we have already written in the full guide on Dyson air purifiers, Dyson is very shy when it comes to revealing recommended room sizes. Nor do they provide AHAM verified CADR ratings, which would be useful.

To compare the performance of Dyson HP04 vs HP02 vs HP01, we have to rely on the maximum airflow.

Note: Dyson primarily produces all kind of fan-based devices. They love to put airflow in their air purifier specification.

Again, we see that there is a clear difference between HP01 and HP02 versus HP04.

Performance-wise the HP04 is a more powerful floor unit. It can be used to remove airborne particles in larger rooms than HP01 and HP02.

HP04 has about 50% higher maximal airflow and can be used in larger rooms. This is a floor-based air purifier.

HP01 and HP02 have a smaller airflow and can be used in standard-sized rooms. They are also desk-based.

Dyson is almost equally shy regarding noise levels as is with CADR rating and room size. If you check the basic specification sheets of HP01, HP02, and HP04, and compare them, you will find only 1 noise level.

The only one with the known noise levels is the Dyson HP04 with 62 dB maximal noise levels. It also has the ‘Quiet Mark accreditation’. For comparison, there is no such accreditation for HP01 nor for HP02. That may lead us to believe they have higher noise levels than HP04.

It needs to be said that 62 dB is quite a high noise level for an air purifier. There a whole list of other air purifier brands – such as Alen, Molekule, Honeywell, Winix, Levoit, Hathaspace, Okaysou, Coway – that offer devices with below 62 dB noise levels.

Why is that? Well, Dyson air purifiers do create quite a lot of airflow. Much more than other companies that are not as fan-based as Dyson is.

Dyson offers quite a decent amount of features. Obviously, the best feature HP01, HP02, and HP04 all share is the Triple Function (air purification, cooling, heating).

To compare HP01 vs HP02 vs HP04 regarding included features, let’s first list all the main features for each model:

Here is the main difference between the HP01 and HP02 as far as features are regarded:

The one neat features that HP04 has (and HP01 and HP02 don’t) is the ‘Senses’. According to Dyson, this feature “Automatically detects airborne particles and gases, then diagnoses and reports them in real-time.”

Comparatively, they are smaller and weigh less. Typical of desk-based units, obviously.

HP04 is narrowed but about 5-inch taller and about 4 lbs heavier than HP01 and HP02.

Not all Dyson Pure Hot+Cool air purifiers have the same price. As we have seen thus far, there are differences in filters, size, maximum airflow, and features. Of course, that also justifies the difference in the price of the individual units.

Here are the standard prices of all 3 models:

The positive price progression is clearly seen. The HP Series Dyson air purifiers are in the price range of Molekule Air, Airdog X5, and the best Coway units.

That is ‘if you look at the standard prices’:

You don’t have to always buy Dyson units at standard prices, however. Sometimes you can get deals on HP01, HP02, and HP04 units and save a few $10.

Here we list all the potential deals for all the 3 units:

Let’s first summarize the bottom lines of all the specs we covered:

If you combine all the differences between them, it’s obvious that HP04 is the best among the 3 Dyson Pure Hot+Cool units.

It is, however, useful to keep in mind that Dyson is a fan-based company. You can check the best air purifier brands and their models here.