Dyson HP01 can warm up the room immediately. Quite literally, actually.

HP01 air purifier was the one that launched Dyson’s Pure Hot+Cool series. Dyson HP01 was the first air purifier with the ‘Triple Function’ capability consisting of:

Dyson is one of the top 5 air purifier brands (others include Alen, Molekule, Coway, and Blueair). As we’ve seen in LearnMetrics’s rundown of 12 Dyson air purifiers, the Pure Hot+Cold is Dyson’s most popular air purifier series.

When HP01 was launched, it was widely recognized as one of the best air purifiers on the market. During the last few years, however, HP01 was joined by HP02 (HP01 with Dyson Link app but +$100 price tag), and large-room HP04, and HP06 in the Dyson Pure Hot+Cool series.

The whole purpose of this Dyson HP01 review is to answer just one question:

Without breaking a sweat we can say ‘Yes’ to ‘Is Dyson HP01 any good?’. To fully compare and contrast the HP01 air purifier with other purifiers, we’ll go through a specs-based in-depth review.

As always, we will go through a whole ran range of specifications essential to HP01 operations. We always give you the positive as well as negative aspects of every air purifier. Here’s the rundown of specs we went through with Dyson 01:

Review At-A-Glance: Times may change, but the Dyson HP01 is still one of the best air purifiers in 2022. It’s a superbly made, high-performing air cleaner with an appropriate price point. It’s definitely not “Just great”. Specs-wise it’s quite amazing and comes in a beautifully designed casing.: 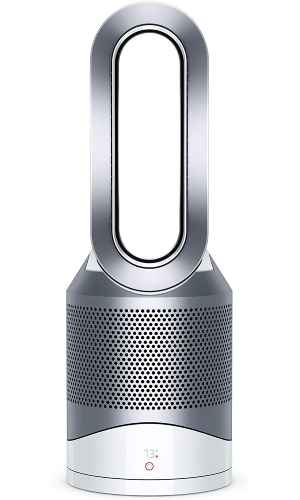 Filters are the heart of Dyson’s air purifiers. Dyson HP01 uses a 2nd generation filtration system, based on the 360° Glass HEPA filter.

This kind of HEPA filter was tested to capture all the small airborne particles. It can eliminate more than 99.97% of dust, pollen, smoke, and other allergens that are as small as 0.3 microns in diameter.

In fact, the Dyson HP01 is so good that it was certified as asthma and allergy friendly by the AAFA (Asthma and Allergy Foundation of America). Of course, HP01 HEPA filters can’t compare to IQAir HealthPro HyperHEPA filters – that’s why IQAir air purifiers are also one of the best air purifiers for allergies.

In addition to the HEPA filter, the Dyson HP01 also has an activated carbon filter. Here’s why:

With every purchase of the Dyson Pure Hot Cool HP01 model, you get a 12-month supply of these filters. Check the Dyson HP01 sale section for more information.

The testing of HP01 filters, as well as all other filters in Dyson, is conducted by IBR laboratories, according to the industry standard IEST RP CC001.5, which came into effect in 2015.

All in all, the Dyson HP01 follows the tried-and-tested HEPA filtration system many other companies such as Honeywell and Coway employ.

Dyson is notoriously shy about revealing CADR ratings. Rather, they focus on the maximum airflow an air purifier can generate. After all, Dyson is primarily oriented toward fans, and in the world of fans, maximum airflow is everything.

Dyson HP01, for one, doesn’t have a CADR rating. But we do know that it has a 425 CFM maximum airflow. That alone is quite a powerful airflow; it can purify the air, cool it down, or heat it up.

That’s enough to remove airborne pollutants in medium-sized and ever large rooms:

As we have seen, Dyson HP01 is quite a capable air purifier. It can generate 425 CFM. Comparable devices such as Alen BreatheSmart 45i, Molekule Air, and Coway AP-1512HH Mighty can cover rooms from 400 sq ft to 1000 sq ft.

Dyson Pure Hot Cool HP1 has a similar coverage area range. It works well in medium-sized bedrooms, for example, as well as in the master bedroom.

They can also be used in living rooms and even offices, given the 425 CFM maximum airflow.

Because they are stationed on a desk, they are very appropriate for working spaces; the office is one such example.

Power consumption is quite peculiar in all Dyson Pure Hot+Pure. All air purifiers – even the big 153 Watt Molekule Air Pro – are very inexpensive to run.

Dyson HP01 is no different; that is, when you use it as an air purifier. As an air purifier, it’s maximum wattage is 44W. If you run it 24/7 – generally, HPo1 is turned on all the time – it will use about 1 kWh per day. And that’s if it’s at the maximum fan speed setting all the time, even during the night.

Here the kicker, though:

Dyson HP01 is also capable of functioning as a space heater. The cooling effect of Hot+Cool is just a fan (not an air conditioner). The ‘Hot’ part, however, is a true heater. And for heating, you need some serious wattage.

That’s not a negative thing, however. The capability of the Dyson HP01 to double as a true space heater is quite useful in cool winter months.

Dyson HP01 is considered to have a smooth and silent operation. Dyson doesn’t realize it’s official noise levels. However, you will hardly find someone who complains about the loud noises while reviewing the Dyson HP01 air purifier.

If you measure the noise levels, you get below 40 dB noise levels on the lowest setting. On the highest setting, however, the decibel meter does go part 55 dB.

When you start using the Dyson HP01, you will usually start it at the maximum level. That is the level that generates 55+ dB of noise. However, that might be just the 1st day.

On the 2nd day of use, the automatic particle and gas detector will see that the indoor air quality is higher and recommend lowering the fan speed setting. Most of the lower settings are below 50 dB; that’s more silent than your average fridge.

The most noticeable special feature of the Dyson HP01 is that it’s can work as an air purifier and a cooling fan, and even a space heater. Apart from that, it also has quite a lot of extra features, including:

HP01 Pure Hot+Cool air purifier is controlled via remote control. The HP02 version has the ability to be connected to the Dyson Link app, but that boosts the price of the air purifier (+$100)

One reviewer gave the simplest answer to why Dyson air purifiers are more expensive than others is this:

“They are freaking awesome!”

The best part about the HP01 is that it is actually the cheapest Dyson Cold Hot+Cool air purifier. You can see the comparison of Dyson’s HP01, HP02, HP04 vs HP06 here and look at the prices.

It certainly costs less than other innovative air purifier units like Airdog X5 ($550) or Molekule Air ($799).

The regular price of the Dyson HP01 is $499. You can check if there is any sale available below:

As we have seen, the original price of this model is $499. Here we list any available Dyson HP01 sale link. Currently, you can get the HP01 on sale for less than $499 here:

Without a doubt, Dyson HP01 is one of the best air purifiers in general. It certainly is the most affordable one from the Dyson Pure Hot+Cold series; HP02, for comparison, costs $100 more just because of the Dyson Link app.

All in all, it deserves one of the highest ratings.