On a ceiling fan, which way is summer? Which fan direction should you choose for winter?

Some homeowners might be surprised just how different the correct ceiling fan direction in summer/winter makes. Even more importantly, by picking the wrong ceiling fan rotation for a season, you will unnecessarily raise your cooling and heating bills by over $100/year.

We are going to explain which way should a ceiling fan rotate:

Yes, to a surprisingly large extent. Here is a direct quote from the U.S. Department of Energy:

“If you use air conditioning to cool your home, a ceiling fan will allow you to raise the thermostat setting about 4°F with no reduction in comfort.” (DOE on ceiling fan use in summer)

With all this said, here is the correct fan direction by season: 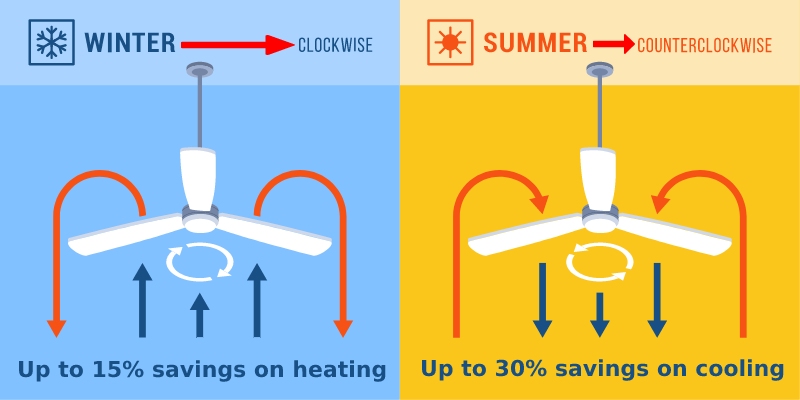 Let’s first look at what direction should a ceiling fan go in summer, and expected electricity savings:

When set to the counterclockwise direction in the summer, the ceiling fan pushes the air downward. This downward airflow direction creates a light cooling breeze.

The column on air increases the evaporation from our skin and stimulates the body’s natural cooling mechanism. That’s why DOE, according to their experimentation, determined that you can set the air conditioner setting 4°F higher in the summer.

Example: If you set the thermostat to 68°F in the summer, with the correct summer ceiling fan direction, you can now set it to 72°F. You will feel that the temperature in the room doesn’t change due to the evaporation cooling effect from your skin.

Now, it’s important to understand that the overall temperature of the room ceiling fan is in does not decrease, even if you have the correct summer ceiling fan rotation. The room has the same temperature with or without the fan. Nonetheless, the temperature we perceived due to the summer counter-clockwork fan setting is lower.

How Much Does Correct Ceiling Fan Direction With Air Conditioning Save?

Of course, it always makes sense to set the ceiling fan rotation for summer when using an air conditioner. To adequately calculate how much less you will pay for electricity as a result of that, we need to take into account two factors:

According to the EIA’s 2015 study, we spend about 12% of all our energy expenditure on cooling alone. That’s $265 per year. The 30% reduction in cooling expenses saves an average household about $80/year.

Running a ceiling fan also adds to the electricity bill. However, running a 20W-50W ceiling fan vs. a 500W-1,200W window air conditioner, for example, is a big difference.

According to the DOE, in some cases, a ceiling fan can completely replace a room air conditioner:

“In temperate climates, or during moderately hot weather, ceiling fans may allow you to avoid using your air conditioner altogether.” (DOE)

Example: Let’s say we have a 12,000 BTU 1,000W window air conditioner and we use it with a 50W ceiling went (spinning in the counter-clockwork direction).

That means that, with the ceiling fan rotation for summer, we will:

With this summer fan + air condition setting, we can effectively reduce our cooling costs by as much as 25%.

In short, using a ceiling fan in the direction for summer presents one of the easiest ways how to reduce cooling costs. We just need to use the counter-clockwork setting that will produce the ceiling fan downward airflow direction.

Now, let’s have a look at what ceiling fan direction we should choose for winter (and accompanied savings on heating):

It’s quite obvious that in the summer, a column of downward airflow will cool you down. With the clockwork fan direction ‘Winter’, it’s less apparent why we should set the ceiling fan direction in winter clockwise to produce the upward airflow.

If, however, we ceiling fan direction in winter to clockwise, the upward airflow direction will push the colder floor level air up. This air will displace the warmer ceiling level air, and push it downward.

That’s why we should set ceiling fan rotation in the winter clockwise.

What effect does pushing this warm air down to the floor level have on heating costs?

The indoor air will feel warmer and you can even lower the temperature on your thermostat without losing the warmth.

Let’s calculate a bit how much you can save by switching the ceiling fan direction to clockwise in the winter:

How Much Does Correct Ceiling Fan Direction In Winter Save?

We again turn to EIA’s 2015 heating costs study for vital data. An average US household spends:

If we use adequate ceiling fan position and clockwork direction in the winter, we can see how much we can save if we reduce our heating costs by 15%. Here are the heating savings numbers in a household with correct winter ceiling fan rotation:

Effectively, you are saving more than $100 per winter season with most heating fuel options.

All it takes is to correctly switch fan direction by season.

Now, in some cases, homeowners have difficulty telling if a fan is going clockwise or counterclockwise. We will look at how to tell these two ceiling fan directions apart, and how you can switch from clockwise to counterclockwise and visa-versa (winter to summer, summer to winter).

How Can You Tell If A Fan Is Going Clockwise Or Counterclockwise?

That’s in theory. It can be quite difficult to tell which way the blades on a ceiling fan are actually spinning.

The best way to tell if a fan is going clockwise or counterclockwise is by checking for downward or upward air movement.

Here’s what you do in a step-by-step way:

With all of this, you are now set to take all the advantages of correctly setting your ceiling fan rotation both in the summer as well as in the winter.