Wall-mounted fans are the easy space savers. You can install them on any wall, don’t need to be hard-wired, they don’t take up your floor space, and can provide both cooling and adequate ventilation to any space.

Picking out the best wall-mounted fan, however, can be quite a bother. There are so many of these fans with wall mounting out there; anybody can get easily lost in them.

We did exactly that. Got lost in them and searched for the best wall-mounted fan on the market. The key points are the specs – fan diameter, airflow (CFMs), noise levels, running costs, brand reputation, reviews, and the price. Based on these you can tell which wall-mounted fans are good and which ones are bad.

You can check the whole list of the best wall-mounted fans below (complete with a spec-by-spec comparison table and individual reviews).

Types Of Wall-Mounted Fans (And Where To Use Them)

Here is a shortlist of types of wall fans and what you can use them:

The main thing is to figure out how much airflow you need (CFM requirements). Let’s look at the most important specs to watch for when selecting the right wall-mounted fan:

5 Key Specs To Check Before Buying A Wall-Mounted Fan

Out of these specs, as we have seen, the CFMs are the most important. What size wall-mounted fan you need depends primarily on the square footage you want to cover.

In most cases, you are looking to achieve at least 8 ACH (Air Changes per Hour) in the space you use the wall-mounted fan in. If the ventilation is already really bad, you should shoot for 16 ACH; that means that the wall-mounted fan has enough airflow to change all the air in that space in 3.75 minutes. You can read more about how to calculate ACH here.

Here is a table that denotes how many CFM you need to ventilate spaces with 8 ft ceiling height:

As you can see, the CFM airflow is the most important factor when it comes to choosing the best wall-mounted airflow.

Here are the other 4 key factors you should consider before buying:

With all these things considered, let’s have a look at which are the best wall-mounted fan currently on the market: 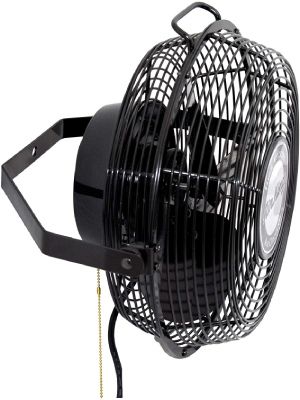 Air King 9312 is one of the most versatile quiet wall-mounted fans. It has a smaller up to 1,360 CFM output and can be used as a home wall-mounted fan or for smaller garages, gyms, and so on. It costs less than $100.

These wall-mounted units can be quite noisy. In comparison, the Air King 9312 is very quiet. With the 42 / 49 / 56 dB noise levels, this is the quietest wall-mounted fan you will find.

The powdered coated metal blades can also be used outdoors. These are 12-inch blades, made in the USA.

If you are looking to ventilate bigger spaces (1,000 sq ft or more), the Air King 9312 will just not provide you with sufficient airflow.

If you are looking for a small fan that can be mounted on the wall, the below $100 Air King 9312 is the perfect choice: 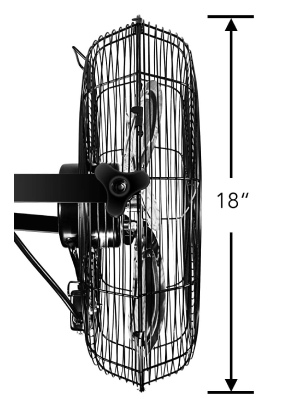 On top of that, it has noise-reducing technology that lower the noise output by as much as 40% compared to standard wall-mounted fans. With 45 / 52 / 60 dB noise levels, we can see that even if you run it at full speed, the Simple Deluxe 18-Inch fan will generate only 60 dB of noise.

It comes with a powerful thermally protected PSC motor; this enables it to achieve high RPMs and produce larger airflows.

The Simple Deluxe 18-Inch can be used in garages, workshops, and ever warehouses.

There might be a problem with the reliability, however. Simple Deluxe is a ‘no name’ brand that doesn’t have such a good reputation for durability as Air King or Lasko, for example.

All in all, the Simple Deluxe 18-Inch pack quite a lot of airflow for a wall fan that costs less than $70: 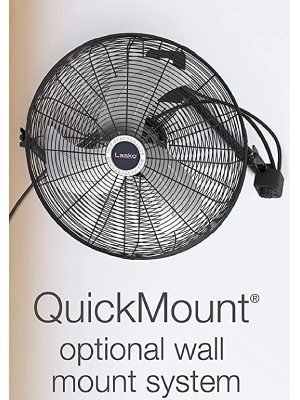 Lasko 2264QM is an interesting fan. It’s a true floor and wall-mounted fan combo. Basically, it is primarily used as a floor fan but you can mount it on the wall as well. With this dual positioning, it’s quite a useful and portable fan.

If positioned on the floor or mounted on the wall, the Lasko 2264QM can generate up to 3,460 CFM airflow. That’s quite a lot and can adequately ventilate areas with up to about 3,000 sq ft total square footage (8 ACH).

Lasko is also known as one of the best price-performance brands. This floor and wall-mounted 2-in-1 fan is available for less than $80.

It doesn’t come with specified noise levels, however. That may be an indication that we are dealing with a noisy wall-mounted fan.

All in all, Lasko 2264QM is quite a unique wall-mounted fan because it is basically a floor fan that can double as a wall fan as well: 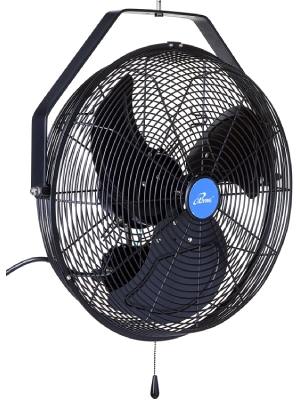 It can produce an airflow of up to 6,360 CFM. This is way more than most other wall-mounted fans.

For outdoor use, you need a sealed fan motor. This means that the water can’t mix with the lubricating oil found within the motor. The blades are also wet rated.

Of course, despite 3,000+ positive Amazon reviews, the drawback of this fan is a ‘no name’ brand. Nobody really knows iLIVING as a brand; that might put the fan’s reliability into question. The price of this outdoor/indoor wall-mounted fan is also quite high; above $100.

Nonetheless, this is a very powerful fan that can generate a lot of cooling breeze and is even useful in open spaces:

This is a short description of wall-mounted wall fans. Hopefully, you will find it useful to start selecting your own fan, based on the specifications and your needs.