Price-performance. That’s the motto behind the best Levoit air purifiers.

The world is full of luxury air purifiers. They are beautifully designed, have fancy new technology, and usually cost more than $500 per unit.

Levoit is the No. 1 brand when it comes to price performance. The best Levoit purifiers are just as capable of removing indoor air pollutants such as dust, pollen, smoke, mold, and so on, as the premium air purifiers.

This thing is this:

Levoit does not position itself as a premium brand. It’s the cozy budget-friendly air purifier brand with strong specifications.

Here’s a quick list of air purifiers with similar specs, along with the price tag:

In short, Levoit air purifiers are known as capable (or even more powerful) as the big brand air purifiers. One difference:

Levoit unit price is slashed in half (compared to other same-specs air purifiers).

That makes Levoit the best price-performance air purifier brand in the industry. One interesting consequence of that is this:

Here is the list of the best Levoit air purifiers in 2023. Below we compare all 7 top models, indicate the specs that matter, and follow them with individual reviews of each unit:

This is the basic filtration setup that can even achieve above 200 CADR rating with enough airflow throughout the air purifier.

The best part with a simple filtration system is this:

Replacement pre-filters and HEPA filters are both cheap. They have to be changed every 6-8 months (if you run the Levoit air purifier 24/7, which you should). That means the maintenance cost of Levoit units is minimal; the only thing that’s better than this are the $500 units with washable filters like Airdog X5.

Coverage Area (Based On CADR Rating And ACH)

Levoit offers a broad air purifier portfolio. The smallest one – LVH132 – is recommended for very small rooms with about 129 sq ft. The biggest one – LV-H134 Tower – can cover up rooms up to 710 sq ft or even serve as Levoit’s whole-house air purifier.

Most people love Levoit because they can buy several small room units (125-250 sq ft) for less than $100 each.

Levoit, however, is thorough. They use 3.33 ACH; that means the air in the room will be completely replaced every 18 minutes. That’s what ensures the superb effectiveness of Levoit air purifiers within the recommended room sizes.

Levoit air purifiers are among the quiet ones. None of their units cross the 55 dB noise levels.

In fact, one of the more popular cheaper units – the Levoit LVH132 – produces minimal noise. At the low setting, it runs on 27 dB, and at the high setting, it reaches only 46 dB. That makes it the quietest Levoit air purifier.

With every unit, you will see the noise range.

Some features are always nice to have. Levoit offers quite a few:

With that in mind, let’s look at the reviews of 7 top-rated Levoit air purifiers: 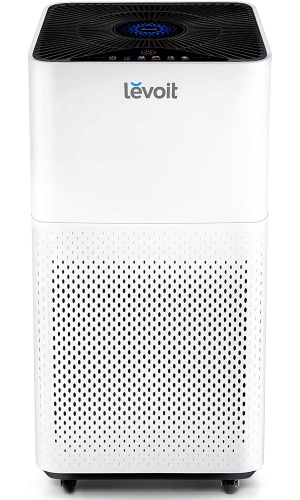 This gives the Levoit LV-H135 capacity to change the air in a 463 sq ft room every 12 minutes. That’s right; the square footage is based on 5 air changes per hour. That guarantees Levoit LV-H135’s efficiency in 400-600 sq ft bedrooms, living rooms, or even kitchens.

With maximum of 54 dB noise levels, the Levoit LV-H135 is a quiet air purifier, especially considering the bigger size of the unit.

All in all, it’s nearly impossible to get a 360 CADR rating. Levoit LV-H135 is the only budget-friendly air purifier capable of such air pollutant removal efficiency. Hands down, this is the best and the newest Levoit air purifier. 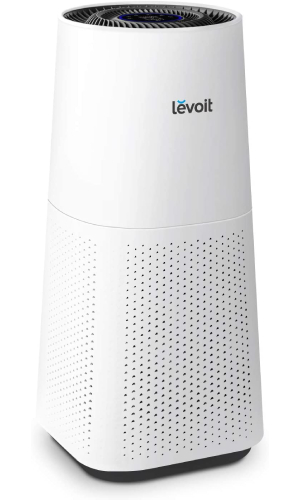 Levoit LV-H134 Tower is the biggest Levoit air purifier. It is meant to be used in large rooms with 710 sq ft, or even a whole-house air purifier.

The best thing about ‘Tower’ units is that they can deliver a lot of airflow and air pollutant removal capability with a small cross-section.

For example, Levoit LV-H134 Tower is a big 25.1 lbs air purifier, but because it’s a tower (almost 32-inch tall), it takes only 16 by 15.4 inches of space. Dyson air purifiers – a premium brand – has perfected the ‘tower’ air purifier format, and Levoit quickly implemented this structure in the LV-H134 Tower.

The CADR rating of 235 is above-average. However, by CADR rating alone, the Levoit LV-H134 cannot compare to its successor – the LVH135 (#1 Levoit air purifier).

With a quiet operation, 3-stage Levoit filtration system, and an above-average CADR rating, the Levoit LV-H134 Tower is the best Levoit air purifier for large rooms: 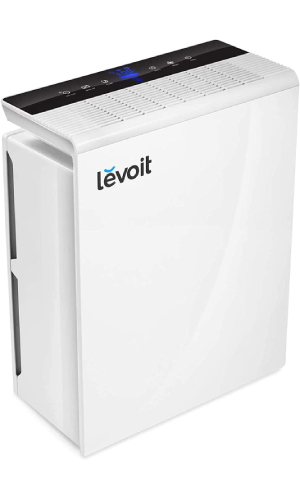 Levoit PUR131 is the latest wi-fi connected smart air purifier with a compact design. As you might have noticed, most Levoit air purifiers have the ‘LVH’ in their series number. Levoit PUR131 has that ‘PUR’. We’ll see that that ‘PUR’ makes it perfect for smoke smell removal.

Levoit PUR131 has a 3-stage filtration system; we already know the pre-filter and HEPA filter that will care for large and small solid particles, respectively. What makes the Levoit PUR air purifiers different is the addition of the huge honeycomb activated carbon filter.

Activated carbon filter doesn’t stop solid particles; rather, it adsorbs gaseous odors like cigarette smell. The ‘PUR’ series by Levoit has a 30% higher purification efficiency. In short, it removed odor and increases indoor air quality 30% faster than other standard filtration systems (like the Levoit LVH series).

This compact Levoit air purifier can be hooked up to Alexa and voice-controlled. You can also use the smart remote control to adjust the fan speed or just leave it to Auto Mode to increase the indoor air quality most optimally.

The biggest drawback – the reason why Levoit PUR131 didn’t make LM’s list of the best air purifier for smoke – is the 135 CADR rating. That’s not ideal, but even with a lower CADR rating, this Levoit air purifier will very effectively remove smoke smell in smaller about 300 sq ft rooms. 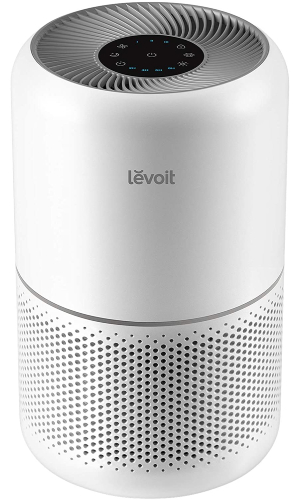 On top of that, it’s very energy-efficient. In fact, the Core 300 has an Energy Star certificate, which is great for a small air purifier.

That’s why people buy Levoit Core 300 in bulk. It’s not unusual to buy 3-4 Levoit Core 300 due to the confidence in the device (based on specs and reviews) and pure convenience. Levoit Core 300 weighs less than 10 lbs, you can carry it around with ease, and it actually looks nice in a room.

If you go down the main road and decide to buy several Levoit Core 300, do check the article about where to place air purifiers here. That’s how you will get the most out of this superb and incredibly popular Levoit air purifier. 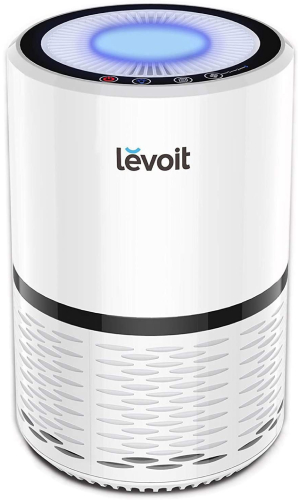 Levoit LVH132 is the basic Levoit HEPA air purifier for very small rooms. In many ways, the fact that it is so basic is its primary advantage.

This is a small 6.6 lbs air purifier with 3-stage filtration and not many moving parts. That gives it quite a few advantages:

Nonetheless, it has a decent 110 CADR rating for such a tiny air purifier. All in all, the ratings and reviews Levoit LVH132 gets confirm this is one of the best overall air purifiers for the smallest rooms. 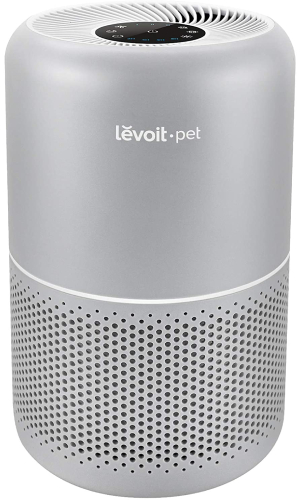 If you have pets – cats, dogs, other little furry animals – you’re probably vacuuming several times per week. Here’s the newsflash; even without a vacuum lifting them up, small pet dander and fluff is in the air.

Several air purifier brands have developed an air purifier for pets to remove all that fluff and pet particles too small for the naked eye to see, including Levoit.

With pets, the most important part of the filtration system is the pre-filter. To best combat larger pet-related particles, Levoit has designed a new fine non-woven fabric pre-filter. It’s more effective at capturing all those large pet dander, fur, and floating hair. What is even more important, it has a higher capacity than a standard pre-filter.

It goes without saying that the HEPA filter that follows the pre-filter reduces up to 99.97% of harmful air pollutants, smoke, pollen, mold spores, dust mites, and other allergens as small as 0.3 microns.

All in all, Levoit Core P350 Pet is the perfect solution for people who have pets. Usually, you buy several of them for the number of rooms in which your cat or dog likes to be lazy: 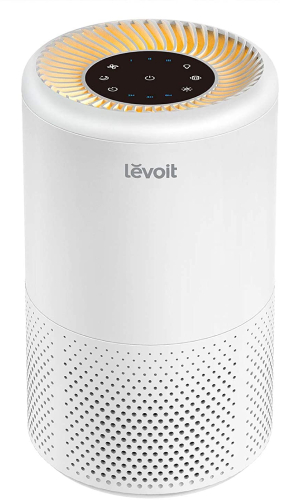 Levoit Vista 200 is one of the more popular Levoit air purifiers. The low $90 is definitely the big factor; because the specs are definitely not.

Vista 200 might be nice to look at, but it has one major drawback: The 50 CADR rating.

This is a tiny air purifier, no doubt, but even for a very small room 50 CADR rating might not cut it. With specs like 3.3 lbs total weight, it’s more of a toy air purifier than a real one.

Nonetheless, if you don’t have a big problem with indoor air pollution, running Levoit Vista 200 24/7 might have some impact on increasing air quality.

Are Levoit Air Purifiers Any Good?

Yes, they truly are. When people see the price of Levoit units, they might suspect the performance is not on par with other more expensive air purifiers.

However, Levoit is known as the best price-performance air purifier brand for a reason. If you check the specs like CADR rating, 3-stage filtration system with HEPA filter, and coverage areas, you will immediately notice that Levoit air purifiers are actually pretty good.

The best part is that they come at half of the cost of those more expensive same-specs air purifier units.

Which Is The Best Levoit Air Purifier?

Levoit LV-H135, without a doubt. With a 360 CADR rating, and an efficient 3-stage filtration system, the Levoit LV-H135 is the best Levoit air purifier overall.

It really needs to be said ‘without a doubt’ because most people know Levoit Compact 300 model. That’s only natural; Compact 300 is the most popular and best-selling Levoit air purifier that costs less than $100.

That doesn’t make it the best, if you check the specifications, of course. LV-H135 has a 360 CADR rating and can remove air pollutants from big rooms, while Compact 300 with a 135 CADR rating is only appropriate for small rooms up to about 300 sq ft.

Can You Leave A Levoit Air Purifier On All The Time?

Yes, you can leave any Levoit air purifier on 24/7. In fact, all air purifiers are designed to run nonstop. Or at least, until the indoor air quality index is sufficiently high enough.

Air pollutants such as dust, pollen, smoke are being lifted from the floor in the air all the time. That means that running a Levoit air purifier all the time makes sense; you’re continuously removing the new air pollutants that may rise up from the ground.

Is Levoit Made In The USA?

All Levoit air purifiers are designed in the USA. Levoit has a base of operations in southern California, but they have offices all over the world.

That includes North America, Germany, as well as Asia.

Where the actual manufacturing of the Levoit air purifier units happens, we don’t have that information on hand.

No, at least not the radiation that might be harmful to humans. All air purifiers, including Levoit units, emit visual and infrared light; both are harmless.

On top of that, the Levoit air purifier doesn’t produce ozone; a concern that many future air purifier owners might have. You can read about the dangers ozone generators present here.

Can You Clean Levoit Filter?

No. HEPA filters are notoriously unwashable; nobody, including Levoit, has developed a HEPA-based filtration system that could be washed instead of being replaced.

Other brands are trying to come up with washable filters. Airdog X5 is a nice example. All other brands, however, including Levoit, readily offer filter replacements because these sorts of filters (HEPA filters) cannot be cleaned once they reach the small particle capacity.