“Evaporative coolers can be a cost-effective cooling option.” (Energy Saver 101, Department Of Energy)

Summers can be crazy hot. If you have a patio picnic, or just want the cool 15°F to 40°F breeze indoors, the best option is to choose an evaporative cooler. That’s why we have compiled a list of the best evaporative coolers in 2023 for cost-effective indoor and outdoor cooling.

Swamp coolers, otherwise known as swamp coolers, decrease the air temperature by using the process of natural water evaporation. These devices can generate 1000+ CFM of cool air during sweaty summers. You can even use them to cool down larger spaces like larger rooms, outdoor patios, garages, and so on (we’ll look into how to adequately size a swamp cooler later on).

Evaporative coolers offer quite a lot of advantages. These include:

On top of that, according to the US Department Of Energy, “evaporative coolers cost about one-half as much to install as central air conditioners and use about one-quarter as much energy.”

In this all-in-one guide about how to choose the best swamp cooler, we will explain how evaporative coolers work, how to properly size a cooler (CFM to square footage), why tank capacity matters, and so on.

Considering all the metrics, LearnMetrics has complied a list of the best swamp coolers in 2023. Further on, you will also find a spec-by-spec comparison of top portable evaporative coolers, followed by reviews of the best units/models. If you’re in a hurry to get some much-needed cooling, you can skip to the complied list here:

If you do have time, it makes sense to educate yourself about evaporative coolers before you buy one. We will start this ‘How do I choose a swamp cooler?’ with an introduction to how swamp coolers actually work:

How Do Evaporative Coolers Work?

The basic premise of cooling devices like air conditioners is that they use the thermodynamics principle to lower the output air temperature. This is usually facilitated by the use of refrigerants, compressed/expanded by a compressor.

Here is the step-by-step process of how evaporative or swamp coolers work:

As you can see, this water evaporation process involves quite a few moving parts. The difference between good and bad swamp coolers is more apparent in:

Based on the CFM generated, we can cool down big or small rooms. Let’s look at how much CFM an evaporative cooler has to generate to cool down certain square footage:

How To Properly Size A Swamp Cooler?

CFM is a measure of cooling airflow. Here is the full table of how big an evaporative cooler you need to cool down certain square footage:

In general, it’s better to have a too big swamp cooler than a too little one. Bigger coolers can be overkill but will provide adequate cooling. On the other hand, smaller coolers can not be enough to properly cool the space you’re in.

For example, if you’re looking to cool down 750 sq ft, you have two choices:

On top of the estimated evaporative cooler CFM requirements, you should add 15-20% to the total CFM output if:

Now that we know how big an evaporative cooler we need, let’s look at the importance of the tank capacity:

Why Big Tank Capacity Is Better Than Below 10 Gallon Capacity?

Evaporative coolers use a water evaporation process to generate a cold breeze. The water is stored in a tank within the cooler. The more water you have, the better cooler you have.

Tank capacity indicated the maximum amount of water an evaporative cooler can hold. Given how big the tank is, we distinguish between:

Big tanks also have to be refilled less than the smaller tanks. If you’re looking for a 3000+ CFM air cooler, you should check that it has at least a 10-gallon tank.

Indoor And Outdoor Use (No Venting)

Everybody loves swamp coolers when they are installed outdoors. There is no other HVAC device that can cool down a patio or even a picnic place than a big swamp cooler.

Indoor use is another deal altogether. Here’s why:

Evaporative coolers generate cold AND humid air. That cool breeze has a high relative water concentration. That means that if you use it in an already +60% indoor relative air humidity room, you will unnecessarily add more moisture. Excessive moisture can cause mold growth (you’ll need to inspect and test for mold), and you may need a ducted or big whole-house dehumidifier to reduce it.

On top of that, Sylvane suggests that evaporative coolers should only be used indoors on the West Coast (California, Nevada, etc.). Here is a handy map – mind you, this is only for indoor use:

This is, for example, why evaporative coolers are so popular primarily on the West Coast. They have versatile use; you can use them:

Because they are portable, you can easily move them from the living room to your picnic area and enjoy a cool breeze.

Considering everything here, let’s use these parameters to pinpoint which evaporative air coolers are the best on the market: 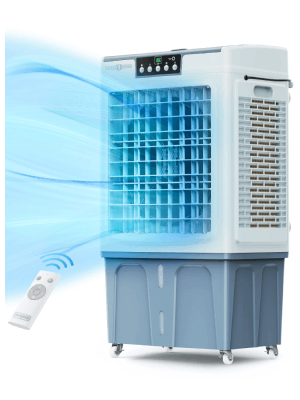 TaoTronics PE-TF015 is the perfect portable evaporative cooler. It has all the right specs: very high CFM, the biggest water tank, and a large coverage area. On top of that, it has one thing no other big evaporative cooler has – 4 ice packs to produce truly cool output. Given all the specs, this is the best evaporative cooler currently on the market.

TaoTronics PE-TF015 can generate more cooling airflow than pretty much any other swamp cooler. The massive 2,943 CFM can generate as much cooling effect as a small-sized central air conditioning system. The key part here is the use of 4 ice packs that decrease the overall temperature of the air significantly.

It can be used both indoors and outdoors. With 2,943 CFM it has total coverage of up to 9000 sq ft. That means that it can provide a cooling breeze to more than 1 large room. In fact, it can be used as a ventless cooling solution for a small-to-medium-sized house.

On top of that, the TaoTronics PE-TF015 has a very large tank capacity. It can hold 11.9 gallons in addition to the 4 ice packs on the sides.

The only drawback of the TaoTronics PE-TF015 is the 220W power draw. You can easily plug it into a 110/120V outlet but it will draw about 2 amps when set in the high fan speed setting.

Overall, the TaoTronics PE-TF015 is a perfectly balanced portable evaporative cooler that can generate a lower-than-average temperature of output air due to ice packs. It has the best specs for this price point as well: 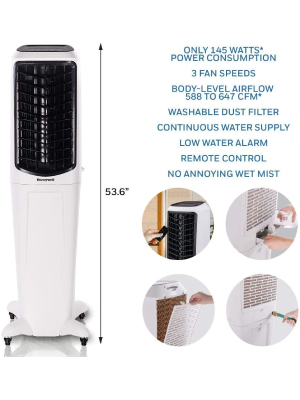 Good indoor evaporative coolers are hard to find. The best one of the top units is the Honeywell TC50PEU. This is the flagship Honeywell evaporative cooler that can be used indoors; do keep in mind that it works best in places where relative air humidity is below 60%.

Honeywell promises a ‘cool lake breeze’ coming from the Honeywell TC50PEU, and that’s actually pretty accurate. This cooler can generate up to 647 CFM of cooling airflow; that’s a too-low airflow for outdoor use. However, it’s perfect for indoor use and you will feel that cool lake breeze.

The Honeywell TC50PEU is most predominantly used in homes and home offices. It has a tower structure; this was specifically designed so that you will use as little space as possible. It has only a 16×16 inch cross-section, and it towers to 53+ inches. That enabled the unit to provide a vertically-adjusted cooling airflow; the cool air comes from the whole length of the cooler.

Based on the 647 CFM, it has a coverage area of up to 365 sq ft. The outstanding metric is that the Honeywell TC50PEU has a 12.5-gallon tank capacity. That’s just outstanding; the ratio of CFM to tank capacity is the best in the industry.

What is more, with a 145W power draw, the Honeywell TC50PEU has high energy efficiency. Even if you have it on at full speed for 8 hours, it will spend only 1 kWh of electricity (about $0.13 electricity cost).

All in all, Honeywell TC50PEU is the best indoor evaporative cooler that can be used at home or at the home office. It has a very large tank for its size, has a vertical tower structure, and a very cost-effective operation: 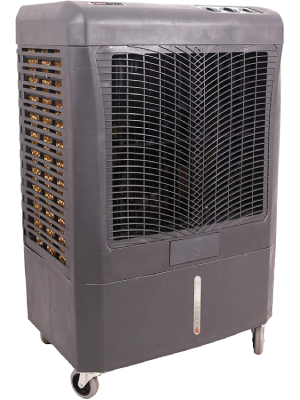 Hessaire MC37M is a robust swamp cooler that can be used is frequently used in commercial settings. You can put this unit on the construction site or an outdoor event venue, and it will work smoothly. Its prime quality is that is the most energy-efficient evaporative cooler by far.

With 3,100 CFM of cooling airflow, the Hessaire MC37M is one of the most powerful outdoor swamp coolers. It can provide a cooling effect to spaces up to 950 sq ft.

The best part about this is that it only draws incredibly low 150 watts to run at full speed. That means that you’re getting a grand total of 3,100 CFM for 150W. By energy efficiency, the Hessaire MC37M can beat even the #1 TaoTronics unit.

What is more, the Hessaire MC37M has a 10+ gallon tank capacity (10.3-gallon, to be exact). It can also oscillate and thereby provide the maximum possible coverage and the consequent air circulation.

All in all, Hessaire MC37M is the most energy-efficient and cost-saving evaporative cooler. With its robust heavy-duty structure, it can be used pretty much anywhere: 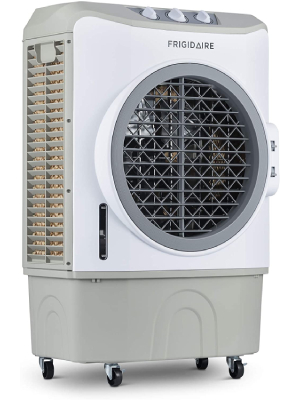 Frigidaire is one of the best-known and reliable brands in HVAC. They make everything from air conditioners, dehumidifiers, and, fortunately, they also make one of the best Frigidaire evaporative air coolers – the Frigidaire FEC1K7GA00.

This is the perfect unit for dual indoor and outdoor use. The Frigidaire FEC1K7GA00 generates 1,650 CFM of chilling airflow. That’s just enough to put it in the patio and cool it down during the hot summer afternoons, and it has enough cooling output to cool down up to 650 sq ft indoor spaces.

You have 3 speed settings – low, medium, and high – and you can freely adjust the cooling airflow to your exact needs.

Frigidaire specifically says that the Frigidaire FEC1K7GA00 has ‘an oversized’ tank. That’s a great thing! The 10.6-gallon water reservoir for a 1,650 CFM max. cooling airflow makes all the difference. You don’t have to constantly add water; pretty much eliminates the refills when used outside.

The easy-glide casters are also useful when you have to move the Frigidaire evaporator from indoor to outdoor.

All in all, Frigidaire has done a remarkable job with its dual-use (indoor + outdoor) portable evaporative air cooler. This is hands down the best Frigidaire cooler you can buy: 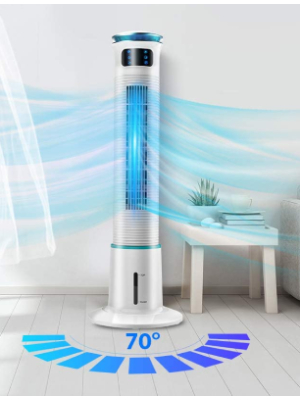 Breezewell is probably the most popular brand of indoor portable evaporative air coolers. Granted, they have beautiful designs and very nice photos; you can see Breezewell on Instagram quite a lot. But it’s not all about the looks; the Breezewell tower cooler is actually one of the best and most inexpensive evaporative coolers you can buy.

The Breezewell tower offers quite a lot, including:

All that for about $200. These are quite outstanding features for such a cheap evaporative cooler. On top of that, you have up to 650 sq ft coverage and a minimal 60W power draw.

The key drawback of Breezewell evaporative coolers is the small 1-gallon water tanks. Those need to be refilled quite frequently. On the pro side, however, you can put ice in them instead of water for a truly chilly breeze.

All in all, it’s not a wonder why the Breezewell tower cooler is so massively popular. It offers quite a lot of features for a $200 portable evaporative air cooler:

These were the best evaporative cooler or swamp coolers currently on the market. If you have any question regarding the coolers, you can use the comment section below.