SEER is a metric for the general energy efficiency of air conditioners.

If you don’t already know what it means, don’t worry. You’ll find out here – keep in mind that you need to understand what SEER means and what is a good SEER before you go shopping for air conditioners.

What does SEER mean?

SEER stands for ‘Seasonal Energy Efficiency Ratio’. It is a standard HVAC metric that will tell you how well an air conditioner will perform during the summer season (energy-wise, obviously).

While the EER rating will tell you the efficiency of an air conditioner at perfect conditions (95°F), the SEER rating gives you performance efficiency during the whole summer season (65°F to 104°F), according to the following equation:

How to find the SEER rating on the AC unit?

Every air conditioner should have a SEER rating in the list of specifications:

First, we’ll look at what SEER rating means in the air conditioners, how much a better SEER rating AC unit can save you during the summer season, and look at the SEER rating chart.

SEER Calculator For AC Units (What Is A Good SEER Rating?)

When looking at different air conditioners, it’s useful to know the electricity costs associated with the unit. Obviously, SEER ratings in the most important metric when choosing an energy-efficient AC unit. Knowing what a good SEER rating of an air conditioner is essential.

A good exercise is to input the BTU of an air conditioner (let’s say 20,000 BTU) and change the SEER rating. Here are the yearly electricity costs for this example for different SEER ratings:

You can see that picking the 20 SEER air conditioner instead of the 14 SEER one would save you $50+ per year. In 10 years, that’s $500. Even if the 20 SEER costs $200 more, it’s worth the price. Here are, for example, ductless mini-split ACs with SEER ratings above 20. If an air conditioner has a 20+ SEER rating, that is considered an excellent energy-efficient unit. For example, Mr COOL DIY 12k unit has a 22 SEER rating.

You can put in the BTU of your air conditioner, and its SEER rating; the SEER calculator will calculate the yearly electricity cost.

You can calculate yourself how much let’s say 18 SEER air conditioner would save you compared to 16 SEER unit.

As we can see from the examples, the AC unit with these specifications will cost us:

In the end, you will find a full list of 2 different SEER rating air conditioners compared. Here’s the quick look, more at the end of the article:

What Does SEER Rating Mean In Air Conditioners?

In air conditioners, the SEER rating is a metric that basically gives you an idea of how much cooling effect your AC unit will give you if you power it with a certain amount of electricity (power).

Example: You have a 10,000 BTU portable air conditioner. You’re going to use it for 150 days during the long hot summer; you run it 16h per day.

Let’s calculate how much energy this uses:

How much does that difference in SEER rating save us? Well, let’s calculate. An average price of a kilowatt-hour (kWh) in the US is 13,19 cents. 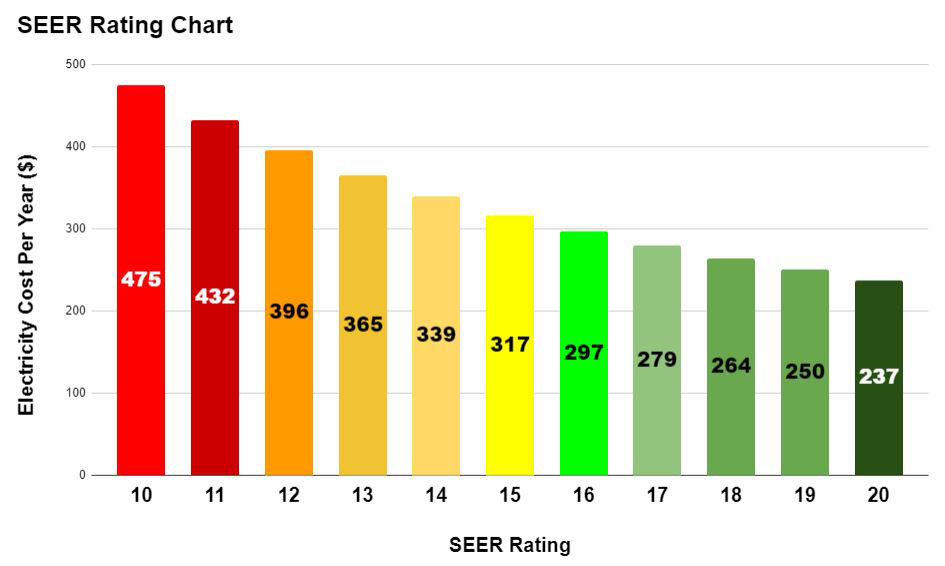 You can see that an air conditioner with SEER 10 will cost 475$/year in electricity cost from the chart. The SEER 20 air conditioner will give you the same cooling effect for 237$/year because it’s more efficient.

What Is A Good SEER Rating?

Only old devices made in the 80s and 90s will have a SEER 10 rating. From 2015 onward, most states have regulation in place that guarantees that all new air conditioners should have a SEER rating of at least 13 or 14 (depends on the type of air conditioner and state).

Honestly, if you’re buying an air conditioner that will last for 10 years or more, it is highly recommended to buy one with a higher SEER rating. It might cost $100 more, but you will spend less energy running it, which is good for your pocket and the environment.

What Is The Difference Between 14 SEER And 16 SEER Rating?

Let’s say we have a 12,000 BTU device. By using the SEER cost calculator above, we can see that:

That means the difference in the electricity bill would be about $15 every year. You can use the 16 SEER vs. 14 SEER calculator here to give you an idea of which one is better for your specific situation.

To answer ‘what SEER rating should air conditioner should you buy’ is straightforward: Buy the one with the higher SEER rating. In 10 years, a high SEER unit’s higher price will pay for itself in saved electricity costs.

Example: Let’s look at 3 zone mini-split systems with 20+ SEER rating. The difference between the #1 Senville mini-split (SEER = 22.5) and the #2 Mitsubishi (SEER = 19.2) is rather large. Such a difference can create a $200+ difference in a yearly electricity bill.

I hope this SEER calculator is helpful. If you have any problems using it, you can write to us in the comments below, and we’ll look at how we might help.

Based on 1,000h per season run time, air conditioner capacity of 24,000 BTU, and $0.1319 kWh cost, we have prepared a full comparison table of different SEER rating pairings.

If you haven’t found the pairing you were looking for, or if you have any questions regarding the SEER rating, you can pose them in the comments below.

48 thoughts on “SEER Rating Chart + Calculator (How Much $ Saved With Higher SEER?)”