The SEER rating is a universal rating to determine the energy efficiency of air conditioners.

SEER stands for ‘Seasonal Energy Efficiency Ratio‘; this is the key metric to determine how much electricity our AC unit will draw. A large number of AC units have either 14 SEER or 16 SEER.

When figuring out which unit to buy – 16 SEER vs. 14 SEER air conditioner – the answer (seems to be) very simple.

A higher SEER means we’ll have to spend fewer electricity dollars to get the same cooling effect.

But when it comes to 16 SEER vs. 14 SEER AC units, the answer is not as clear cut as it first seems because we have to include the initial cost of both devices.

Because so many homeowners face this problem, we have designed a calculator that determines when it’s smarter to buy 14 SEER unit vs 16 SEER unit. You’ll find it below (in the section ’16 SEER vs 14 SEER calculator’).

In the long term, the total cost of an AC unit comes from:

In short, we can summarize the total cost like this:

The key problem we face is this: 16 SEER is more energy-efficient than 14 SEER unit. It will use less electricity (true), but it will have a higher initial cost (true).

To calculate which unit – 16 SEER or 14 SEER – makes a financially viable option, you have to input the price of the unit, capacity (in BTU), how long will AC unit last, and the price of electricity in your area (in $ per kWh). We predispose a standard 1000 h per season air conditioner use.

To get an idea of how long different AC units last, you can check our article about AC lifespan expectations here.

Input all the info in the calculator here:

We’ll look at total costs after 0 years (just the initial cost), after 10 years, and after 20 years of use. 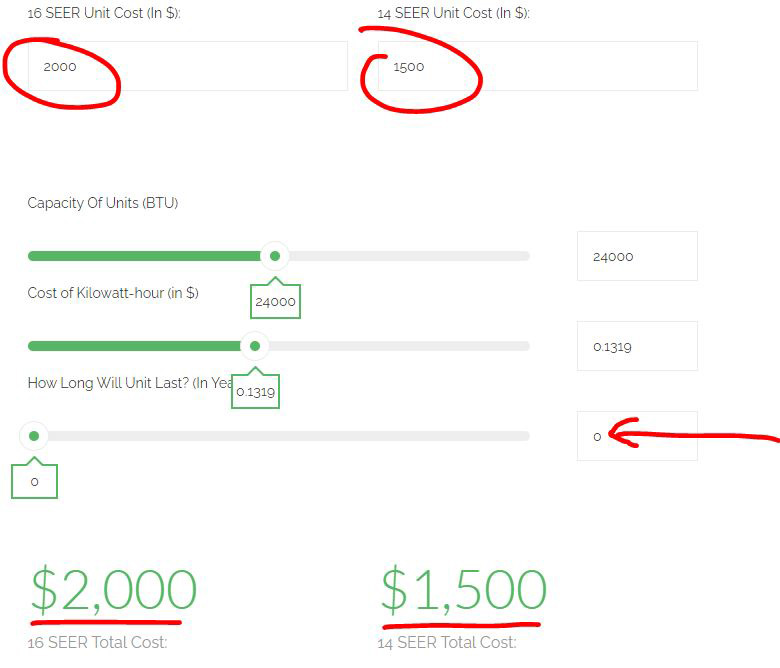 All we see here that when we buy a 14 SEER unit, we spend $500 less. Surely electricity costs can’t make up for such a huge difference, right? Let’s see. 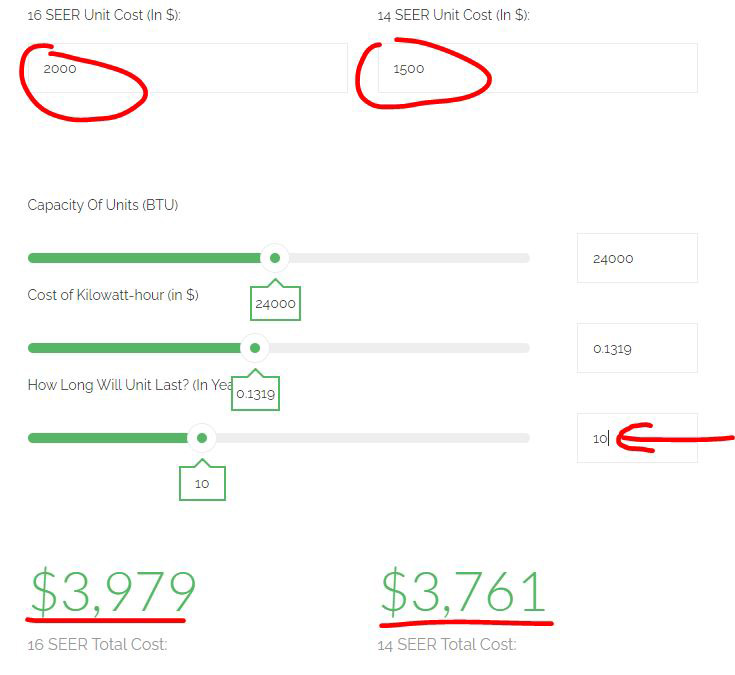 The best mini split AC units – the ones even with 20+ SEER – have a lifespan of 20 years or so. By the way, if you’re interested in long-term electricity savings, you can check out our list of mini-split AC units with the highest SEER ratings here. 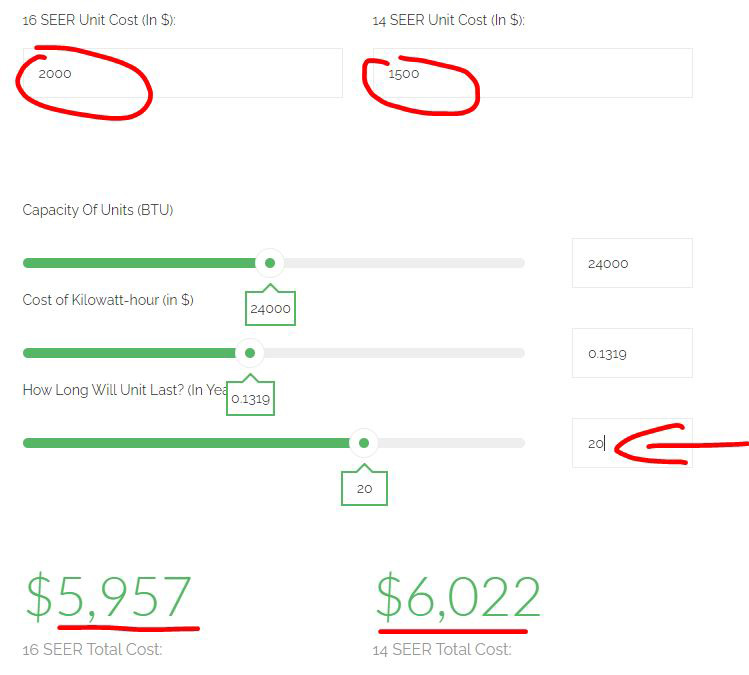 After 20 years, we see that the total cost of the unit and the accumulated electricity costs are actually in favor of the 16 SEER unit. Let’s break down the 16 SEER vs 14 SEER costs:

This means the initial cost of unit + accumulated electricity costs (over 20 years) for the 16 SEER unit come to $65 less than for the 14 SEER unit.

This might be surprising for some homeowners. However, those electricity savings you’re getting with 16 SEER units do accumulate over time. In fact, if you use a 24,000 BTU device for 20 years, it makes financial sense to buy a 16 SEER unit even if it costs $500 more.

You’re more than welcome to use the 16 SEER vs 14 SEER calculator above. It will give you an idea of when it makes sense to buy a 16 SEER device instead of a 14 SEER device in your specific information.

Using the example above, we have established that paying $500 more for 16 SEER 24,000 BTU air conditioner we’ll use for 20 years makes financial sense.

If you have a specific situation, please do use the calculator. If you have problems, you can share your situation in the comments below, and we’ll try to figure out which device would be better for you – the 16 SEER or 14 SEER.